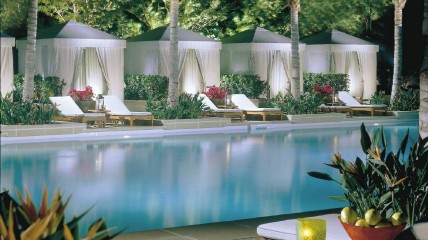 A fusion of the Caribbean, American and the South and Central American influences, the Four Seasons Hotel Miami is the latest blend of various cultural influences that manifest the real blend of Miami, with style and class all rolled into one.

The Four Seasons Hotel Miami is all about converting a time spent in the hotel as if you were just transported to a whole new dimension, to a whole new level. Just found above the Miami skyline, the Four Seasons Hotel has its name fit to a tee. Found a block away from the Biscayne Bay, this empire made of world-class amenities and services truly make up for what you thought a four seasons hotel to be and more.

The Four Seasons Hotel Miami comes with two pools, cabanas, and fitness centers with spinning and yoga exercises available. Here you can also find a business center made for those who don’t want to miss out on any work or event they had back home.

This great paradise of a hotel also houses a club called Edge, where their signature mojitos and martinis make up the bar’s list, toasting a few drinks with friends be it before or after dinner.

There are so many activities you can splurge on as the hotel is surrounded by various shopping facilities, night clubs, galleries, and sights that you can truly be enamored with. Strolling around the city of Miami can truly captivate the essence of how a getaway should be, and spending it in the Four Seasons Hotel Miami can truly make up for what it’s worth. Go ahead and book a room, and experience the sense of awe you’d be getting nowhere else but in this amazing spot.